I went up to Columbia today to see Kathryn Johnston and David Schiminovich. I took the local train, so that I would have plenty of time to read and comment on the latest draft of Joo Yoon's paper (with Johnston and me) on tidal streams. In the paper we use scaling relations—dimensional analysis and order-of-magnitude arguments—to describe the dynamical effects of halo substructure on cold stellar streams; then we compare with numerical simulations and observations. The result (against my wishes) is that the rattiness of the Pal-5 and GD-1 streams is consistent, at least roughly, with what is expected in a CDM halo. Argh! But Yoon has done a great job.

At Columbia's Pizza Lunch, Christian Knigge (Southampton) gave a nice explanation of CVs, which are accreting WDs in close binaries with red dwarfs. Because they are Roche-lobe-filling, they have orbital evolution (mass-transfer) times equal to the thermal (Kelvin-Helmholz) times in the dwarf stars. So the non-main-sequence-ness of the dwarf star gives a semi-direct measure of the instantaneous mass-transfer rate. Nice! He also argued that at some periods, there should be many non-CV binaries; Schiminovich and I might be able to detect those in our time-domain GALEX stuff.

After a few days of Thanksgiving vacation, it is back to work, with a blackboard talk by Blanton about PRIMUS, which has been a great success—one of the largest redshift surveys ever undertaken, and undertaken with a small team and a ridiculously small number of nights. Blanton noted the high efficiency of the technology and methods, but also noted some of the mistakes we made early on. I hope we transmit some knowledge to future generations. Focal-plane (as opposed to objective) prism spectroscopy could change the world.

Marshall and I spent the afternoon (among loud children) pair-coding a system to fit his putative blended quasar pair; we developed some ideas about how to deal with the ideas that (1) the quasar positions could or should be generated by a lensing pattern, and that (2) the quasars might or might not vary according to a Gaussian process, and that (3) we might be able to measure the time delay and solve for lens parameters simultaneously with the de-blending operation. We didn't get very far, but these are all good ideas. And LSST-relevant.

Phil Marshall is in town for two days. We batted around the idea of fitting objects in the SDSS Stripe 82 data that have quasar colors but are marginally resolved. These objects could be gravitational lenses, and we could use the variability as well as our knowledge of the PSF to get them deblended and modeled. We debated whether we should deblend first and interpret second, or do the deblending with the interpretation (quasar-variability model or gravitational-lens model) built in from the start.

In group meeting, Eyal Kazin (NYU) led a discussion of some recent baryon acoustic feature measurements, including his own. No-one really understands in detail why the significance of the BAF seemed to go down when the amount of SDSS data used to find it went up (Kazin et al). But Kazin was concentrating on line-of-sight issues: There are some apparently conflicting results in the literature about the line-of-sight BAF signal; people who use different estimators get different significances, and I smell an illegitimate search in estimator space for best signal (though not with Kazin's work; he is doing very straightforward stuff). I have an intuition that everything would be better with a probabilistic methodology that marginalizes over the density field, but I haven't got any implementation of that, so I have no ground to stand on. I can't say much else happened research-wise today.

Rory Holmes, Rix, and I spent a while chatting about the scope of our uber-calibration or self-calibration or calibration-marginalization analyses for potential Euclid or WFIRST survey strategies. The default strategies proposed for these kinds of missions are usually not ideal for photometric calibration, which the investigators imagine will be determined with calibration observations. However, the science data usually contain far more bits of information about calibration than the calibration data, and even more if the science data are taken with calibration information preservation or generation in mind. Fundamentally, it is about redundancy—meaning diversity—in modes, positions, orientations, time coverage, cadence, and so on.

I spent yesterday and today on Spitzer Space Telescope oversight activities, which are not research according to The Rules (or at least I think they aren't). My only scientific activities were reading Wu's thesis, talking with Tsalmantza about binary quasars and the like, and discussing the stellar IMF with Lang.

After a weekend and early morning finishing the NSF proposal, I had my weekly spa on sampling and exoplanets with Goodman and Hou. For the famous Gliese 581 system, there is a fence of multiple likelihood maxima in orbital frequency (period) space, with one (that we know about) much taller than the others. The multiple optima lie on lines in frequency space (apparently), and what we want to make sure of is that the most likely is also the most probable. That is, we want to integrate the likelihood under the prior at each distinct optimum. That is, we need to compute the evidence integral for each of the optima. We would also like to find all optima, and, from among them, the best-of-all optima in both senses, but this is provably hard, so I (now, in my positivist–pragmatist phase) think that the question do we have the global optimum? is outside science. I don't think Goodman agreed with me on that, in part because if you know a lot about the likelihood function (and we do), you might be able to limit the numbers substantially. I think he is right, actually—the exponentially large number we care about might not be so large we can't tackle it—but it sure isn't easy.

To finish his very enjoyable visit, van Haasteren (Leiden) gave the astro group meeting seminar in the morning, with lots of banter and feedback from the crowd. He focused on stochastic signals, but got the most crowd reaction about single-source signals. On the stochastic side, Dubovsky (NYU) pointed out that there are even models in which the stochastic background might have a characteristic frequency.

At lunch and afterwords, van Haasteren and I discussed possible projects. The one we liked most is to try to improve the timing itself by going hierarchical on the pulse shapes. Commenter Steve T on my post of a few days ago was pessimistic, but in fact even a bad model of the variability among pulse shapes and pulse-to-pulse correlations in shape could have a big impact on the precision of pulsar timing. Big theme of my research: You do much better if you model the noise, but then marginalize out those noise-related parameters.

Now off to a weekend of proposal re-writing.

van Haasteren and I tried to insert Hou's ensemble sampler into van Haasteren's gravitational wave detection code. We weren't completely successful, but I think we can de-bug it tomorrow.

van Haasteren described in more detail today how they can recognize that covariances in pulsar timing residuals among multiple pulsars can be the result of a stochastic background of gravitational radiation. The method they use is a Gaussian process, which is a technology much loved by Bovy, myself, and our collaborators (and at least one of my regular readers). The nice thing is that van Haasteren's project is precisely a Gaussian process, and he knows that for good physical reasons. Furthermore, the covariance matrix he constructs is highly constrained by the physics of the problem. At lunch, he described to a subset of Camp Hogg some of the issues he faces in the real world; two of the most interesting are linear algebra—he needs to invert and take the determinant of some very large, very non-sparse matrices—and visualization—if you detect a signal at low signal-to-noise ratio, how do you convince the skeptics? Camp Hogg didn't have much useful to give him on either issue, though we can help, I think, with sampling issues.

Rutger van Haasteren (Leiden) is visiting this week to talk about Bayesian inference, gravitational radiation, and pulsar timing. We spent some time talking about some of the details of pulsar timing, including the fact that every pulse looks different, every pulse is measured at low signal-to-noise, but collections of pulses average to a stable and predictable mean. We realized that there is probably a great hierarchical Bayesian description of this process.

Still more proposal writing, in all available time on the weekend, and in any time I could find today. This was relieved by a great conversation with Goodman and Hou about stellar oscillations in radial velocity data, and a nice talk by Paul Duffell (NYU) on numerical approaches to general relativity.

My break from proposal-writing was a nice talk by Risa Wechsler (Stanford) about finding galaxy systems like that of the Milky Way plus Magellanic Clouds, both in the low-redshift SDSS sample and in huge n-body (dark-matter only) simulations. In both cases, having two massive satellites is rare, but she goes way beyond this, looking at what you can infer about the Milky Way from the presence of the Magellanic Clouds alone. Pretty neat stuff, though in the end she has a depressingly strong endorsement of the standard Lambda-CDM model. 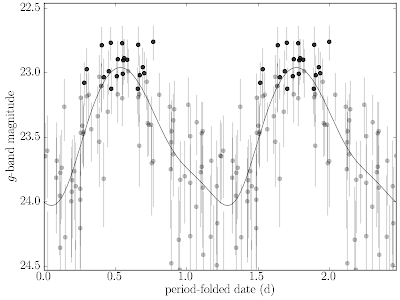 As part of proposal-writing, I simulated fake data on very faint variable stars in SDSS Stripe 82 and then showed, using Foreman-Mackey's implementation of Hou's super-fast MCMC, that we can detect them and measure their properties, even when at no individual epoch is there enough signal to constitute a clear individual-epoch detection.

I procrastinated and accomplished less than necessary on my proposal.

My only respite from proposal writing was a short conversation with Price-Whelan, Foreman-Mackey, and Paul Rozdeba (NYU) about quasar variability in repeat SDSS spectra. We came up with some first steps.

Mike Kesden (NYU) gave the brown-bag talk today about calculation of extreme-mass-ratio black-hole–black-hole inspiral, including gravitational radiation. This is a hard and old problem; he has found what look like inconsistencies in the existing approximate calculations. The work brings up many issues of principle, which makes it great fun for discussion. In the morning, Goodman, Hou, and I discussed—among other things—how to package Hou's code for ease of distribution, use, and re-use.