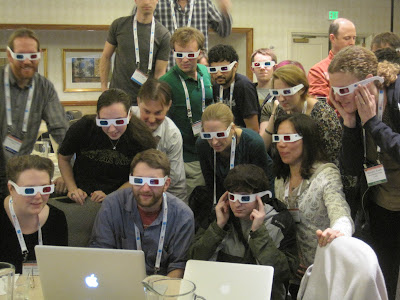 Today was the first-ever AAS Hack Day. We held it on the last day of the Long Beach AAS Meeting. The basic structure was: You sign up (registration fee: zero); arrive at 10:00; people with ideas pitch them; hack hack hack in groups of one or two to six; reconvene at 16:40 to report success or progress or failure. No experience necessary! And it exceeded my wildest expectations. There were many successes; here are some personal favorites:

Mars video
CMU Undergraduate Ashley Disbrow with help from Michele Vallisneri (Caltech) built from NASA Mars Rover data a freakin' three-d movie on the surface of Mars! Go get some red-blue glasses and fire it up!
AstroGov
Justin Vasel (Minnesota) proposed, executed, and shipped a site to track astronomy-related US legislation. Let's hear it for open government, and serious hack skills.
arXiv-to-voice
Various groups worked on different approaches to making spoken versions of abstracts or summaries of arXiv papers for busy commuters and the like.
Fund Me Maybe
Emily Rice (Staten Island) built a large team to do filming for a parody music video about the profession of astronomy. They got some hilarious footage. They didn't finish more than a rough cut, but watch the internets for it.
cosmology calculator
Brooke Simmons (Oxford), at dotastronomy last year built an OSX widget to do cosmology calculations. Today she made a web version of it. It includes the WMAP+BAO cosmologies and so on. Link here.
FITS viewer
Eddie Schlafly (MPIA) wrote a bare-bones but highly functional FITS image viewer in python/matplotlib.
WWT
Doug Finkbeiner (CfA) said in the pitch session that he wanted to have stretch and contrast sliders in World-Wide Telescope. He sat down with Jonathan Fay (Microsoft) and the two of them pair-coded it right there. Fay says that the modification will get pushed into the next major WWT release!
PYRO
Elizabeth Lovegrove (UCSC) had the exceedingly ambitious plan to build an observation scheduler for ground-based observing programs. She recruited team members to calculate exposure times and earth geometry issues. She then, in parallel, looked at optimization subject to constraints and non-trivial utility. Her team didn't finish—maybe because the project would take an operations research firm several years—but my goodness that's a good idea!

In addition to all those, there were several projects making improvements to astropy, writing documentation for astronomers, implementing APIs for various web services (I think mainly in Python), and trying to make diverse code play well together.

I think we are going to do this again next year! Thanks to Kelle Cruz (Hunter, AMNH) for organizing the thing, my start-up for paying for it, and Jonathan Fay and Microsoft for buying us all lunch.